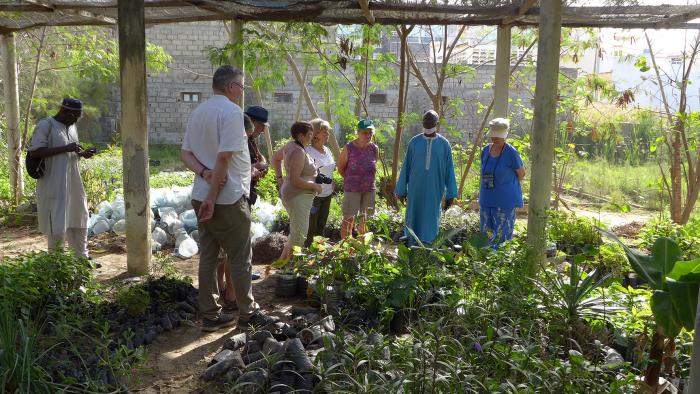 Here is the report from Ingeborg Pint, who also prepared and accompanied this trip, together with Mamadou Mbodji and Djibi Seydi.

A trip to Africa under Corona conditions

After the 2021 virtual trip, I was eager to return to Senegal and The Gambia, to meet friends from both countries and get a sense of whether and how the contributions of the Landscape of the Year had and still have an impact four years after the inaugural event.

Seven Naturefriends from France and one from Germany joined me and took on all the Corona-related efforts (different entry and exit conditions depending on the airline and transit airport, numerous tests, positive - and then negative - results just before departure, wearing masks, etc.).

After not quite two days of attempted social distancing, we adapted to the local conditions, greeted our friends just as warmly as always and, with exceptions in public buildings and hotels, dropped the masks. The joy of seeing each other again was clearly greater than the initial uncertainty. And when the Senegalese football team won the "Coupe d'Afrique des Nations", in the general frenzy even strangers simply embraced us, and we rejoiced with them.

This time the programme included a week of Landscape of the Year and a week of Casamance, the southernmost region of Senegal. My report is mainly about the visits and encounters in the Landscape of the Year. Our guides were primarily Djibi Seydi and Mamadou Mbodji; at the Maison des Amis de la Nature they were, as always, supported by other Naturefriends. In The Gambia, Muhammed Kebbeh (known as "Pasco") accompanied us.

The Women’s Initiative in Njaw, Gambia

Here we have good news to report: with international funding based on "Ecosystem-based adaptation", a millet mill, a room where fruit and vegetables are protected from rain and humidity, and a training room are being built. This is all in support of the committed women, who once again took us to their shop, which mainly offers products made from recycled materials. The women's initiative is in close contact with JUST ACT, the Gambian Friends of Nature organisation, and is an important player in sustainable tourism in the region.

The Kankurang Festival in Janjanbureh

After a more modest edition in January 2021, with few foreign audiences, this time the festival was again very well attended and a great success. It was revived in 2018 to mark the start of the Landscape of the Year, after a long hiatus, and will remain a fixed point in The Gambia's cultural calendar.

The biggest highlight of the trip for me was visiting families in whose gardens tree planting took place in 2018, funded by the NFI Climate Fund, for example in Janjanbureh and Koumbidja Socé. In many places we could see mango trees that already bore and bear fruit. Also, lemon trees are already setting fruit.

And in Yorobelekunda, The Gambia, trees planted during the 2020 international trip have already grown from 1 to 2 m, depending on soil conditions. Here, JUST ACT leaders visit families twice a month and support them in caring for the trees.

But even the trees that were not planted until July 2021, financed by the donations of the virtual trip participants, are also growing well, as we have seen for example in Njaw. Even if a few trees didn't grow here and there (due to unsuitable soil, for example), the Naturefriends’ tree planting campaigns are a success story in any case. Regular on-site visits by competent members of JUST ACT and ASAN in The Gambia and Senegal have contributed to this. Many women proudly showed us their yards, the various devices they have erected to protect the trees from cattle browsing. In one place, the family even compartmentalised a small part of the backyard behind the living area so that the lemon tree planted in 2018 could flourish undisturbed.

At one family's home, we were also able to see two of the cooking sites in operation, we had learned about during the 2020 trip in a workshop. Mrs. Camara proudly explained the steam cooking process and the advantages of this cooking method, which saves wood, does not produce smoke, and speeds up the cooking process. These cooking stations have also found their way into other backyards.

In Koumbidja Socé, we again visited the "Collège d'enseignement moyen", in whose courtyard the opening event of the Landscape of the Year 2018 took place. Students and teachers enthusiastically reported on the exchange programme with a Gambian school, the mutual visits, and the joint stay in the Naturefriends’ house in Dakar. For the young people who took part in this exchange programme, learning and experiencing together was a great enrichment. The school still lacks a well-equipped library, a computer room, and a suitable means of transport for the students, some of whom have a very long way to school.

In some areas, the consequences of Corona are clearly being felt. Encouraged by the activities of the Landscape of the Year and our repeated visits, for example, the owner of the "Campement Le Bambouck" in Koungheul, which I hold in such high esteem, made investments in the facility, and built an extension, but then Corona came, and tourism collapsed at a stroke. He did not receive any Corona aid from the state. What kept him afloat - in the truest sense of the word - was the water bottling plant on his premises, which could continue to operate. In this way, he was able to keep his 29 employees and did not have to dismiss anyone. However, because the buildings have not been used for a long time, damage and signs of decay have appeared in the hotel area, which could not be repaired until now. It is now hoped that tourism will be revived.

We felt first-hand the significant increase in temperature in the areas we visited +38 to 40° during our (short) hikes was a real challenge. Compliments to the fellow travellers who endured this without grumbling.

At the "Vegetable Women of Kamb" - a fixture of all our trips - new things have been built again, this time thanks to the UNDP (the UN Development Programme) - a shade-giving pergola, reinforcement of irrigation, and the compound could be extended so that even more women could be included in the group. But, says Binta Wane, the group's leader, things happen that ordinary women cannot explain, but which are clearly visible: Some plants and vegetables could not thrive because there was no rain in the whole month of July and the soil dried out too much.

The Naturefriends’ house in Mbao, on the other hand, suffered from the late rainy season in August, with extreme rains, the rise of groundwater and the advance of water from the Atlantic Ocean, with severe damage to the floor tiling. This affects all ground level premises where not only the floor tiles have collapsed, but massive water ingress has occurred during the rainy season. This is a cause for concern as higher investment is required to repair it! However, the tree nursery of the house is flourishing, the many seedlings are currently being raised in recycled multi-litre mineral water bottles.

And speaking of the Naturefriends’ house, we remember that the construction company of the regional express train (TER-Train express régional) has set up its offices on the premises of the house. The Dakar-Diamniadio section has now been in operation since December 2021, and we were able to make our way home from the Dakar city tour by train! Diamniadio is the new town about 30 km from Dakar, where ministries, administrative institutions, company headquarters etc. have been relocated. The railway line will be extended to the airport. We can already see that it is very well accepted, saves many bus and car journeys and, with its current 13 stations, provides good access to Dakar's suburbs.

Detour to the Casamance

Here, the great biodiversity is impressive - forests with very different tree populations, extensive (albeit partly damaged) mangrove stands - the "Verte Casamance" (the "Green Casamance") lives up to its name. The still very traditional ways of life of the Diola people are vividly and entertainingly presented in the Diola Museum in Cap Skirring in the form of a forest walk.

The Naturefriends are also mainly organised in schools here: The pupils of the "Collège d'Enseignement moyen Kenya" in Ziguinchor, for example, further process the fruit from their garden into jams for sale, and at the agricultural secondary school in Bignona the Naturefriends look after their own vegetable beds and make benches from recycled car tyres. The Catholic boarding school St.Joseph de Djifanghor on the outskirts of Ziguinchor (of course it is open to members of all religions) sees itself as a gifted institution for girls from socially disadvantaged families who are to be given opportunities for an independent life. It is planned to set up a Naturefriends group ("cellule") at this school as well.

Much remains or is reminiscent of the Landscape of the Year, such as the two memorial stones in Koumbidja Socé and Janjanbureh and especially the countless trees in the family gardens. Senegalese and Gambian Naturefriends will maintain their contacts, take care of the planted trees, engage in sustainable tourism in the region and try to maintain relations between the youth from both countries. Tree and mangrove planting projects in other parts of Senegal and The Gambia are also a result of the Landscape of the Year experience.

It is with a heavy heart and wistfulness that I bid farewell to this Landscape of the Year, where I learned a lot and had the opportunity to meet many dedicated, competent, open-minded, and friendly people and was accompanied by equally committed trip participants.