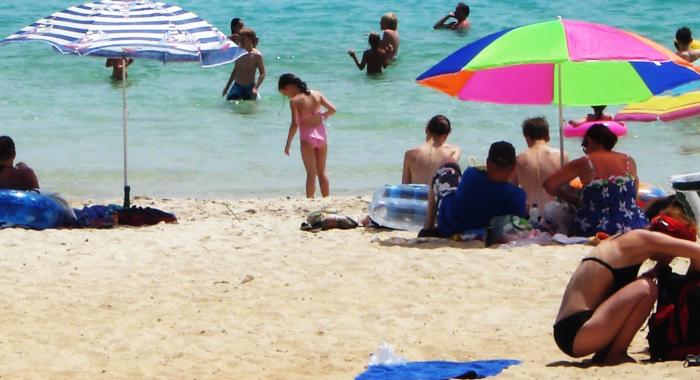 Has tourism reached its limits?!

„Over Tourism“: Our own behaviour is part of the solution.

„Tourists go home!“ Since last year, we can hear the cries and protests from the local communities against the flood of tourists more and more often. “Over Tourism” is the new buzzword, which also plays a big part in the discussions and panels happening at ITB, the international tourism fair currently happening in Berlin. There are many reasons for the current overload at tourism hotspots – our travel and consumption patterns are part of it.

Tourism stuck in the middle – on the one hand the industry celebrates new records, on the other hands news about people protesting the flood of tourists are more frequent. In addition, the green house gas emissions caused by the tourism industry are on the rise – also resulting in negative consequences for the communities in many tourism destinations.

Locals upstaged
What went wrong? „The reasons for this development are manifold – and poor planning and insufficient management, as well as low participation from the local community when it comes to tourism development, aggravate the problem.”, says tourism expert Cornelia Kühhas from Naturefriends International-respect. “Our consumption patterns are part of the problem. We live in a consumer society and this includes travel. Holidays are more and more a commodity, while travelling used to be considered a luxury.”

Shorter, faster, cheaper …
The trend for shorter vacations, numerous times a year, is rising. The offers for cheap holidays are endless and accelerate this development. Thus, tourists flood the beaches and the sights during the high season, to take a few pictures and share them with friends via social media – before rushing to the next attraction.
Few tourists actually take the time to prepare before going on holiday, to inform themselves about their next destination, to dive into the new culture and get to know the locals … The destinations are mere stages to take pictures and the community is pushed into the background.

A tourist’s power
Not only the locals, but also the guests feel overwhelmed by the rising number of tourists. According to a study conducted for the ITB, 25 percent of the participants thought their destination was overcrowded. A paradox – since they are part of the problem.
Cornelia Kühhas appeals to the tourists: „Everybody plays a part in turning the current trend around, in order to achieve a form of tourism benefitting all stakeholders, while being mindful with the natural resources and protecting the environment. Take your time – to really meet people, to dive into the culture and experience the landscape, to take the road less travelled. Stay in places run by locals so that the community benefits from your visit.” And giving preference to longer trips instead of many short weekend stays also lowers the green house gas emissions for the needed transportation.