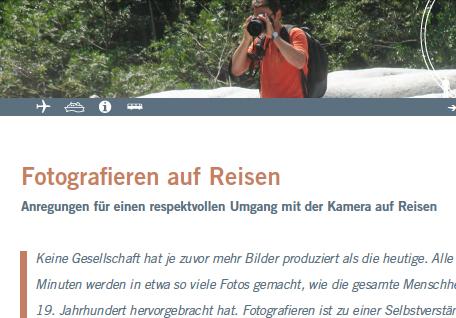 We have never produced more pictures than we do today. Every two minutes, we take approximately as many photographs as the whole of humanity did during the 19th century.

Taking photographs has become a matter of course: we do so all the time and everywhere, we capture holidays, parties, people, animals, sceneries and objects. In times of wide-spread use of smart phones, our cameras are almost always close at hand. There is basically nothing that has never had a photograph taken of it – and ethical and moral boundaries have often been crossed in doing so. Especially when travelling, people often take pictures thoughtlessly and thus frequently break taboos. Travellers and photographers bear a huge responsibility, even more so when visiting cultures that differ greatly from their own. Photograph- ing consciously and taking fewer pictures can be rewarding: less is more!