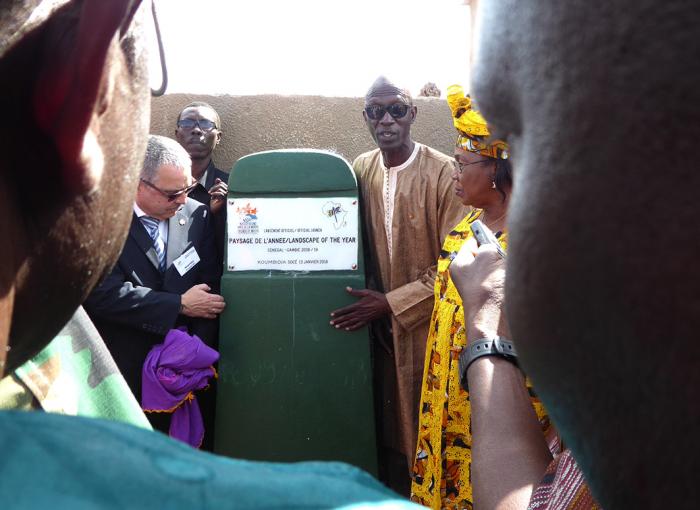 The first year of the Landscape of the Year Senegal/The Gambia: major successes, great commitment and many future plans!

A little more than a year ago, on January 13th, 2018, more than 800 people celebrated the opening of the first African Landscape of the Year in the Senegalese village Koumbidja Socé close to the Gambian border. A memorial stone and hundreds of fruit trees, which were planted after the festivities by African and European Naturefriends together with the local communities, remind us of that big day which marked the beginning of many activities to follow.

Right after the opening ceremony the international Naturefriends trip “Tour d’Horizon” started. 40 Naturefriends from 9 countries participated – and also helped plant fruit trees in the surrounding villages. 40 Naturefriends, who are now ambassadors of the Landscape of the Year Senegal/The Gambia and will hopefully convince many others to visit this region, show support together with their local groups or enable further tree plantings and other climate protection projects in Africa by donating to the Naturefriends Climate Fund.
In the meantime, two other Naturefriends groups came to the region. An international Naturefriends trip for the closing event January 2020 is currently being planned.
The necessary theoretical knowledge for sustainable tourism development was transferred during a two-day stakeholder workshop last September. At the same time, project ideas for supporting sustainable tourism development were created  - as for example boat trips on the River Gambia, which will be implemented by our regional partner organisation “Just Act”.
In addition, Naturefriends Senegal invited a group of students from the region to visit the Senegalese capital Dakar, where they not only got to do some sightseeing but took part in discussions about climate protection and climate justice. The enthusiasm of the students was the reason for a new initiative, which will be implemented in 2019: a cross-border youth exchange for teenagers from the region, who have never been to the neighbouring country.
Thanks to Naturefriends Senegal’s great voluntary commitment, their Gambian partners and numerous European Naturefriends, we were able to achieve a lot during the first year of the Landscape of the Year: about 2.000 trees were planted to support better living conditions and climate protection, the civil society in both countries was strengthened and regional, sustainable tourism was encouraged. We would like to thank everybody who contributed for their support!