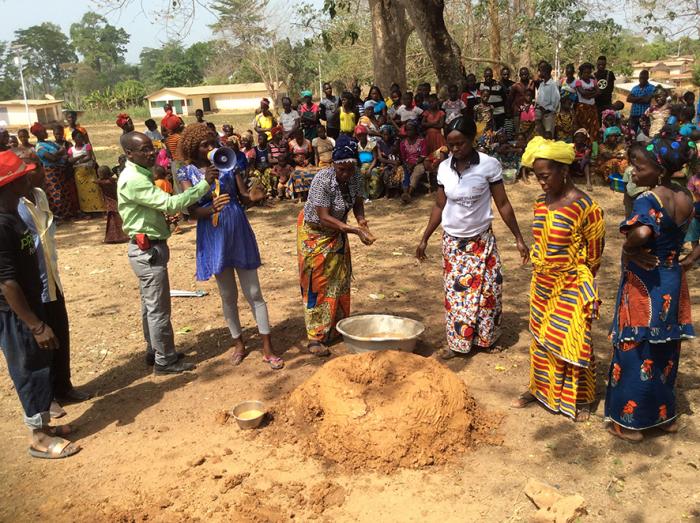 Improved stoves for a better future

by Mamadou Mbodji, Vice-President of NFI and member of the Steering Group of the Naturefriends Climate Fund

In the second half of February, I made a memorable trip to Guinea in order to take part in the implementation of NFI’s current Climate Fund project, which aims to promote improved stoves in three rural municipalities in the Mount Nimba Biosphere Reserve.

The region is covered by mountain rainforest, grasslands and savannah and is one of the richest and most endangered ecosystems of the world. Extraction of wood and forest clearings, due to the increasing need for wood of the local population, are a big threat for the area and intensify the effects of climate change. Improved stoves that save wood and emit less smoke, are an important contribution to climate protection.
After the welcome in Nzérékoré by the leaders of ALUSFADE-GUINEE, member of NFI and coordinator of the project, we started with the last preparations and it was a pleasure for me to participate. The planned activities involved intensive talks with local people to make them aware of climate change, its impact on their lives and the possibilities to contribute to the protection of climate and environment by using improved stoves instead of the traditional cooking places which need huge amounts of wood.

We started in the village of Tounkarata and continued in Nzoo the following day. In both villages, we first talked to local people and explained about causes and consequences of climate change and about the dangers of the classic stoves. These talks were led by two experts, Mr. Bamba, who led the people to a better understanding of global warming and highlighted the responsibility of everybody in reducing greenhouse gas emissions in a very participatory way, and Mr. Gbamou, who pointed out the dangers of the traditional domestic energy sources for human health and for a sustainable future of the forests.

After these sessions, Ms. Saoulohara Fatou, an impressive lady dedicated to environmental protection, gave a practical demonstration on the construction of improved traditional stoves, which are built with local materials. Local people showed a lot of interest and were eager to follow Ms. Fatou’s demonstration. They were impressed how easy it is to build improved stoves without any extra costs and how these stoves can improve their lives – e.g. by needing less time for collecting fire wood and by emitting less smoke which harms their health. And they also understood that the improved stoves contribute to the protection of their environment and the surrounding forests, which are essential for their future.

I was glad to see that the project team had prepared the ground for the activities in close collaboration with the population of the villages. And I noted a strong mobilization of local officials and traditional authorities and a massive presence of women, the first beneficiaries of these stoves. Ms. Fatou did a wonderful job in sharing all her technical expertise in the craft manufacture of improved traditional stoves with local women. She was supported by some women she had trained as local animators and multipliers during the preparatory phase of the project.

I returned home very impressed by this innovative project of ALUSFADE-GUINEE and very proud of the achievements we could support with our Climate Fund. ALUSFADE-GUINEE has stepped into action to preserve the climate and our natural resources, here and now, because they do know that tomorrow it will be too late.

Bossou, the third of the selected villages, will be visited by the project team as soon as the necessary donations for financing the activities will be collected. Whoever would like to support this project is welcome to do so by contributing to the Climate Fund – either to compensate greenhouse gas emissions caused by travel or simply to contribute to more Climate Justice and to a good future for all people: Naturefriends Climate Fund