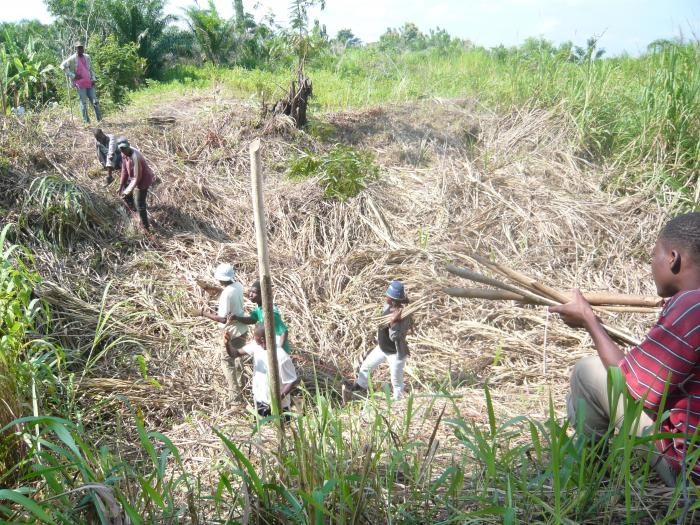 Save Zio river! Planting trees to secure the banks of the Zio river in Togo

For more than 10 years, Naturefriends Togo have been making an important contribution against the advancing erosion of the riverbanks, which is a massive environmental problem in this West African country. The originally existing riverine forests have been destroyed by bush fires and clearings. In the absence of the trees, which strengthen the soil with their roots, the embankments are gradually washed away by the river. By planting trees, the banks of the rivers are stabilised, and the adjoining agricultural areas are secured. In addition, the newly planted trees contribute to climate protection and help to preserve biodiversity in the region.

Due to the increase in extreme weather events caused by climate change, riverbank erosion along the rivers has increased in recent years. Therefore, a long-term project to protect the Zio river is now to be initiated with the support of the Naturefriends Climate Fund:  In the course of an information campaign, the population will be informed about the importance of the riverside forests and motivated to participate in the project. Tree nurseries will be established in three selected villages along the river. There the young trees for the plantings – including endangered tree species – will be raised. The aim is to plant about 10,000 trees in the first year. The establishment of the tree nurseries is intended to ensure that the tree plantings will continue even after the official end of the project.

Thanks to the donations of countless Naturefriends, which have reached us in the last few months, the project could be initiated at the beginning of July with a starting instalment of 3,000 euros in addition to the Climate Fund project already underway in the north of Senegal. 1,800 Euro are still necessary to implement the whole project. This way we can send a strong signal of solidarity and for a good and just future – in times of the Corona crisis with its massive impact on the lives of people in the countries of the Global South this is more important than ever!