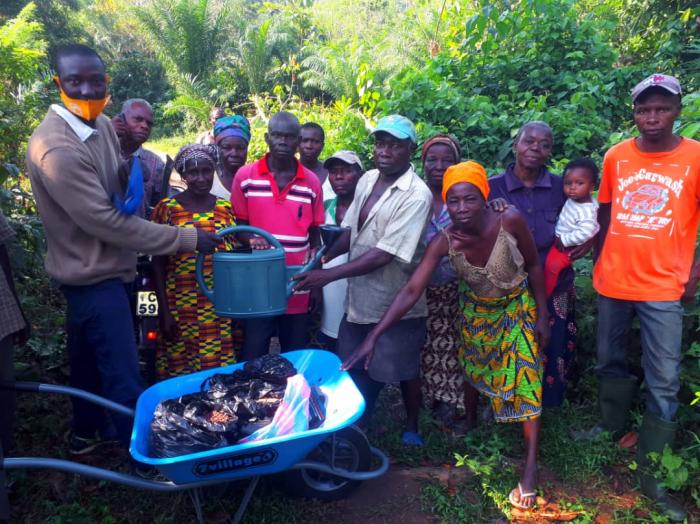 African mahogany (Khaya senegalensis), Limba (Terminalia superba) and rain tree (Samanea saman) - these are just some of the many tree species that have been planted in recent months by the residents of the three Togolese villages of Makumavo, Missahome and Mesiobe on the banks of the Zio River. In total, there are about 11 200 seedlings, which were previously raised in three newly established tree nurseries. The project was made possible by donations to the Naturefriends Climate Fund, which financed the establishment of the tree nurseries and the transport of the seedlings.

"Riverbank erosion is a huge environmental problem in Togo," explains Pablo Victor Yaovi AGBOGAN, Secretary General of Naturefriends Togo, who implemented the project together with the inhabitants of the three Togolese villages. "The original riverine forests have been destroyed by bush fires and deforestation. In the absence of the trees, which consolidate the soil with their roots, the riverbanks are gradually being washed away by the river. Thanks to reforestation, they are stabilised again, and the adjacent agricultural land is secured. In addition, the newly planted trees contribute to climate protection and help to preserve biodiversity in the region."

Naturefriends Togo are also happy with the successful implementation of the project, but they also know that a lot of work remains to be done. "We have demonstrated on a small scale how the reforestation of the riparian forests of the Zio River can work in collaboration with the people who live there. The next challenge will be to expand this activity and restore the riparian forests along the entire course of the river. Our big thanks go to the Naturefriends Europe for making this important pilot project possible with their donations to the Climate Fund."